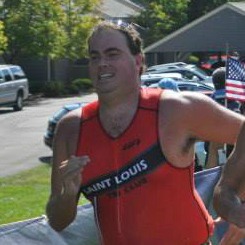 When/where was your first triathlon?
My first tri was the General Smallwood Sprint triathlon in Maryland (fellow club member Brian Jennison was also there but we didn’t meet until years later in St Louis). I had just started biking a few months earlier and my wife had just had her wisdom teeth out, but insisted I coming anyway. In addition to the 3 unscheduled stops she needed I the way to the race, she got really nervous because 5 people in the wave in front of me got pulled out of the water on the swim. I was already focused on not crashing during the bike.
What is your favorite and least favorite gel flavor?
I like Gu Vanilla…a certain honey brand does not agree with my stomach at all. Honey Stinger waffles are something I find very tasty.
What is your favorite race?
Big Shoulders: it’s a 5K swim in Lake Michigan. Conditions can be great or they can be terrible. During one part of the race (on a year with poor conditions) I tried sighting at least twice in every direction before I saw anything: land, boats, or swimmers. I just saw a wall of water in front of me. As it turns out, I was swimming right towards the John Hancock Building; it’s huge but so where the swells.
What is the most challenging moment you’ve had during a race?
In my first Half Iron distance race, I spent at least 10 minutes towards the end of the run trying to figure out this strange feeling I was having. Turns out a quick stop at the porta potty cured me.
What is your favorite place in or around St. Louis to train?
I like to run parts of the 1904 Olympic marathon course. It’s near my house but a bit inspirational to see the markers when you’re tired.
What is the worst food you’ve ever tried in training or racing and why?
I had a 1 pound Iowa cut pork chop in the middle of a ride once. Even the downhill parts of that ride hurt.
What is your favorite thing about triathlon?
I love being part of the club. The added energy you get from hearing someone yell “Go Tri Club!” cannot be matched. I really like that we get a team aspect from an otherwise individual sport. Training together is priceless for me. I struggle to get out the door on my own.
What is the one piece of tri-geek gear that you can’t live without?
I rely on my watch a lot. I have been sticking with a Garmin 310XT, but if someone gave me a 920XT, I’d definitely love to use it!
Tip for new (and veteran) triathletes?
In the words of Tony Horton “Do your best, and forget the rest”.