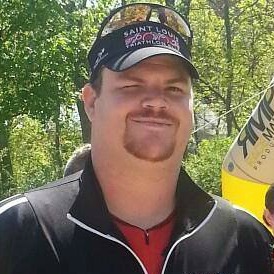 October 16, 2013 I walked into Big Shark West for my first St. Louis Triathlon Club meeting, as I stood there listening to all the club sponsors speak I noticed all these people wearing Ironman finishers jackets and I thought there’s no way in hell I could do that. Fast forward two years later having completed numerous sprint triathlons, a few half marathons and a full marathon, and ultimately a half Ironman. I now know that I can do those things I once thought impossible. The road I traveled to get to this point wasn’t an easy one to follow, but along the way I was supported and cheered on by the great friends I have made in this club. Along the way I have learned a few valuable lessons like nothing new on race day, it was close to mile 10 in my first half marathon and what do I see a couple of people standing outside a bar on the racecourse handing out small cups of beer and something other than water sounded great so I grabbed one and drank it now have I ever had a beer while running….nope…..and a few feet later I though I was going to explode from the carbonation…..like I said nothing new on race day. The other lesson learned that day was about the importance of proper nutrition especially electrolytes…I was maybe two miles after my near explosion that I noticed what I would describe as a golf ball rolling around in my calf, yep it was a cramp waiting to strike and ruin my run afraid of what might happen if I were to stop I kept running and as luck would have it I was able to finish without incident. Ever since that day I learned what my body needs during races and I have never cramped during a race since. As far as advice to give to newbies and veterans it would be to have fun, if you’re not having fun you’re not doing it right. Now get out there make some new friends, set some goals, and rack up those miles.