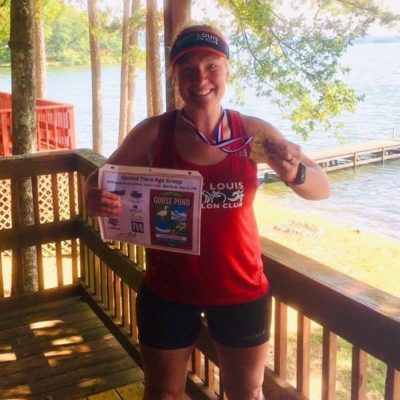 Hi! My name is Gina Goebel and I am happy to serve as a Board Member at Large for the Saint Louis Triathlon Club. I’m an enthusiastic person that loves the challenge, commitment, camaraderie the sport of triathlon embraces. I have only been in the triathlon world a few years, but I have come a LONG way in a short time and I credit a lot of that to the club. Deciding to join the St. Louis Triathlon Club was a no brainer for me. The people, events, opportunities, discounts made the decision an easy one. Shortly after joining the club I attended my first indoor triathlon and was fully embraced by many club members. Obviously, that quickly led to buying a beginner bike, being lent a wetsuit and completing my first real outdoor triathlon with the support of so many club members. I love the community our triathlon club embraces. It is always nice to go to an event and see the familiar faces of like minded people. I have numerous race distances under my belt now (indoor, sprint, Olympic, Half Iron) and look forward to continuing my journey in the world of triathlon.

When/Where was your first triathlon?
I participated in a triathlon in my early 20s back in 2006 when I lived in Texas although I don’t really count that one because it was so pathetic. I would say the first triathlon I really trained for and completed was the STL triathlon in 2017. It was an amazing race and with the encouragement of so many Saint Louis Triathlon Club members I became instantly hooked to the club and the sport ever since!

What is your favorite and least favorite gel flavor?
Blech, I do not like any gels! Give me some real food while racing and training. My favorite foods to train/race with are pickles, PB&J, and Honey Stinger Fruit Smoothie Gummies.

What is the most challenging moment you’ve had during a race?
Riding on roads that are narrow and full of traffic, extreme temperatures and weather, head wind, witnessing someone crash on their bike, mental head games. Triathlon is not for the faint of heart. We rule!

What is your favorite place in or around St. Louis to train?
Creve Coeur Lake and all the surrounding trails, New Town and Lakeside 370

What is your favorite thing about triathlon?
I love the challenge, commitment and camaraderie the sport of triathlon embraces.

What is the one piece of tri-geek gear you can’t live without?
Coeur triathlon shorts, lace locks, GPS watch, foam roller

Tip for new (or veteran) triathletes?
Never be afraid to ask questions. Trust your training. When all else fails smile and everything else will fall into place.