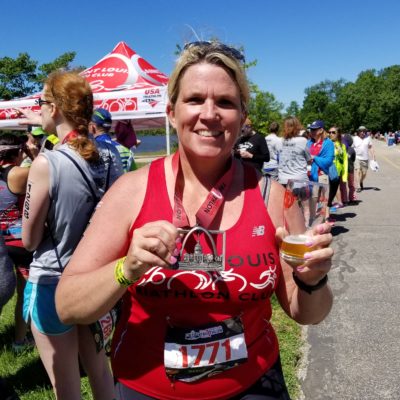 I was always athletic growing up but got away from working out while raising three kids. They are grown now so I started running with a local running store training the past four years doing half marathons and now coach a beginning running team with that program. I have completed seven half marathons so far but did not really have much interest in doing a marathon. I saw a post on Facebook about a triathlon and a friend said, just sign up and do it. So, I Googled St. Louis triathlon and found this awesome club and signed up! I have enjoyed everything this club has to offer, met many new friends, worked with a triathlon coach in the club and attended many events that I knew I wanted to be more involved with the club. I was very excited to hear I was elected to the Board this year and look forward to helping others, growing the club membership/participation and completing several more triathlons!

When/Where was your first triathlon?
St. Louis Triathlon at Creve Coeur Park in May of 2017! Loved it!

What is your favorite place in or around St. Louis to train?
Forest Park, Queeny Park, Creve Coeur Park, Frontier Park

What is your favorite thing about triathlon?
Love the challenge of the swim in open water. Biking was my least favorite part but bought my first really nice road bike, I call my little sports car so I enjoy that leg much better now .

Tip for new (or veteran) triathletes?
Do not be afraid to try a triathlon, any age, any athletic ability, any distance. Start where you need to and grow from there. Definitely attend the open water training sessions before you do a triathlon.