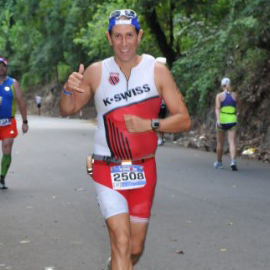 I was born in Cuba and migrated to the US with my parents and older sister in 1969 and settled down in West New York, New Jersey. I graduated from St. Peter’s College in Jersey City, New Jersey in 1985 with a BS in Computer Science and an AA in Mathematics. I became a member of Pi Lambda Tau, a sports oriented fraternity and was very active in year-round sports. Volleyball was a favorite of mine and eventually I became an energetic player and coach.

In 1986 I moved to South Florida to be close to my retired parents and my sister. I have two beautiful daughters, Laura 23 and Julie 21 that are the light of my life. I began running in 2002. I participated in just about all the 5K races that South Florida had to offer at that time. Most weekends during the autumn, winter and spring months you would find me running in a race. I moved to 10K races and knew that endurance running was in my future. The South Florida running scene didn’t have any running races during the summer months so I needed another endurance race. I saw an ad for a triathlon on South Beach, I did the race and was immediately hooked on triathlons.

As a systems analyst / programmer I sit at my desk the entire day. I was overweight and was feeling sluggish. I recall the afternoon that I made a decision to reverse my downhill health trend. I quickly made a complete 180 in my eating and physical activities. After 3 months, I had lost 45 lbs. and my body fat was at 8%. I had accomplished this fast weight lost due to a strict diet while running every day, sometimes twice a day! I was on a runner’s high for months and loved it.

My first triathlon was a local sprint race in South Beach, Florida in 2007. It was also my first DNF due to the pounding of four foot waves that kept the lifeguards very busy. One of those lifeguards had to pull back to shore on a jet ski, I was so glad to have finally reach land and very fortunate that the race organizers removed my chip and told me to just continue racing but that my time would not count. My favorite race is the South Beach Triathlon Olympic (used to be called Nautica South Beach). Swim in the beach, ride the streets of SoBe and run on the boardwalk and paths that line up the hotels. It’s an awesome feeling racing with all the locals and tourist cheering you on the entire run course. My most challenging moment during a race was in Ironman 70.3 Florida in 2010 during a warm lake swim. My legs cramped up so many times that I must have swam from every lifeguard’s surfboard to the next. It was very painful but didn’t want to DNF. I have never been so tired and in pain coming of the swim. My favorite thing about triathlon is the comradely and the healthy life style that comes with it. My favorite piece of tri gear would have to be my Garmin watch. It’s my body’s dashboard that tells me how I’m doing. My tip for all triathletes is to have fun. This sport is not limited to any age or disabilities if you don’t make it fun you will burnout and not enjoy it.