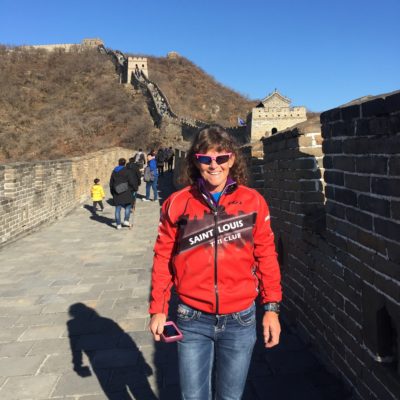 I wasn’t an athlete (but rather a high school cheerleader lol) who was extrinsically motivated after watching her little brother do Kona in 1996. I followed his every word from that point forward……my first Ironman was with him in 2000 (and that was to be his last) at Ironman Canada (the old one in Penticton). Since that time, I’ve done 21 fulls including Brazil, South Africa, and Kona (legacy lottery slot) and 68 halves including Austria, Puerto Rico, and Xiamen, China….the latter of which was the race that qualified me for Kona 2018. I joined the club in 2011 after moving to Saint Louis; having started Columbia Multisport Club in Columbia taught me that you all are my people and I truly love the sport, the passion exhibited by triathletes, and especially love the training. Additionally, this club rallied around me after my husband died in 2014 and I will never forget that.

When/Where was your first triathlon?
Norfolk, Nebraska in 1997. Indoor swim/outdoor bike/outdoor run. Was humiliated to have the next wave of swimmers impatiently waiting for me to finish (dead last in my heat) and vowed to join a master’s group.

What is your favorite and least favorite gel flavor?
Toasted marshmallow Gu is my fav!!! And there is no flavor I don’t like…

What is your favorite race?
Hard to say…….loved Kona in 2013, but I equally love racing local races alongside all of my tri club peeps.

What is your favorite place in or around St. Louis to train?
Columbia Illinois and Wildwood for riding; Forest Park for running

What is the worst food you’ve tried in training or racing and why?
Never met a carb I didn’t like 🙂

What is your favorite thing about triathlon?
The passion and camaraderie displayed by triathletes; the engaging and supportive nature of the sport itself

What is the one piece of tri-geek gear you can’t live without?
Hand-held water bottle

Tip for new (or veteran) triathletes?
For newbies, show up and ask questions. That’s how I learned