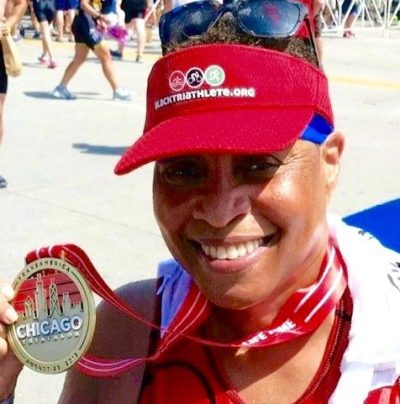 I began my triathlon journey in December 2015 in preparation for a June 2016 milestone birthday. I joined our welcoming St. Louis Triathlon Club and was impressed with the unpretentious and supportive nature of our members. Over the past four years, I have competed in roughly 25 triathlons; volunteered at roughly 30 Big Shark, Big River Running and MSE Racing events; and served as the Club’s social coordinator (2016 to 2018), vice-president (2018), and one of three members-at-large (2019).

When/Where was your first triathlon?
My journey began in December 2015 with an indoor triathlon at the St. Peter’s Rec Plex; and my first triathlon with outdoor biking and running was Try Tri Edwardsville in April 2016. That triathlon was even more special because my son flew in from New York to race with me.

What is your favorite race?
At home, without a doubt, the St. Louis Triathlon is my favorite race because MSE Racing is professional and is always looking for ways to improve the experience. Outside of St. Louis, I haven’t had much experience, but I have enjoyed competing in the Chicago Triathlon (2016 and 2017) because of its size (9,000 athletes) and the ability to hang out in an amazing city.

What is your favorite place in or around St. Louis to train?
I define “favorite” as convenient, flexible and/or picturesque. The locations that fit my definition are Creve Coeur Park for biking and running using the trail extensions; and the Bridgeton Community Center for swimming with its very affordable membership fee and liberal lap swimming schedule. When I have time, I thoroughly love biking on the MCT trails.

What is your favorite thing about triathlon?
There are three elements that I enjoy most about competing in triathlons – 1) meeting new people and learning about their journeys; and 2) knowing that I will constantly grow mentally, physically and emotionally from the experience; and 3) volunteering at both adult and kid triathlons.

What is the one piece of tri-geek gear you can’t live without?
Wow, that’s a hard one! For training, it is definitely my Garmin 935. Nearly two years ago, I was forced to upgrade from a Tom Tom to the Garmin because my coach wanted to assess my heart rate against perceived exertion. Originally, I loathed it because it has too many functions to mention to learn. Now, I can’t consider training without it.

If resources were unlimited, in what international triathlons would you compete?
I’m a big fan of race-cations and I would like to travel to three locations for a 70.3 race – Costa Rica (this one is very possible), Thailand and Peru.