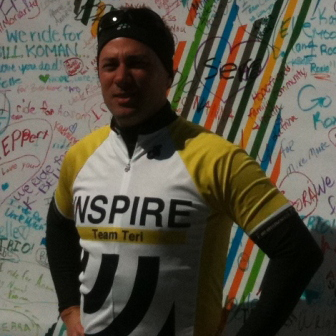 I am a Saint Louis native and probably can consider myself an “STL Lifer” at this point. I came into the sport of triathlon with an endurance running background. After running two marathons in one year, I started to develop the usual runner’s injuries, so I chose triathlon as a way to balance out my muscles. A friend of mine, who had done a few Olympic distances, signed up for the 2013 Kansas 70.3 in October 2012, so I signed up also and used that as motivation to train. With zero race swimming experience and very little cycling experience, I figured that I would need all the help I could get in those disciplines. I stumbled upon the St. Louis Tri Club in late 2012 and gave it a go. The club turned out to be a wealth of resources to help me be successful with my goal, in addition to meeting some awesome new people! I immersed myself in the volunteering aspect of the club in 2013 and decided to lend my time and energy in 2014 by joining the Volunteer Committee as a way to give back and be more involved.

My favorite piece of tri-geek gear that you can’t live without? Definitely the Garmin 910XT! (Can I get a kickback from Garmin for stating that? Please?).

My most challenging moment during a race? I got my nutrition wrong for my first 70.3 (Kansas). Exiting T2 for the run, every step felt like a knife was being jabbed into my stomach! I had to find a way to run through the pain. It was by far the slowest 13.1 run of my life, but I made it through.