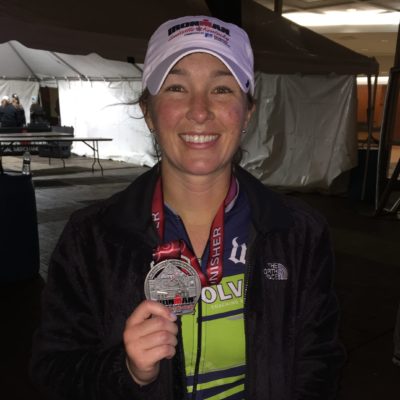 I grew up swimming and my sister got me interested in half marathons and biking when I was in college. I was interested in the challenge of triathlon and like the aspect of doing several sports rather than just running. I decided to join the Tri Club once I signed up for the Steelhead 70.3 in 2016. I knew I would need lots of advice and encouragement and the Tri Club did not disappoint! I really enjoyed the Mentoring Sessions and all the knowledge gained from the club members. Everyone is so passionate and willing to share information and give advice. Since Steelhead I’ve done Chattanooga 70.3 and completed my first Ironman in Louisville last year!

What is your favorite and least favorite gel flavor?
After Ironman I never want another gel…ever. But I put up with vanilla and triple berry.

What is your favorite race?
Maui Half Marathon. It was my 30th half and right before my 30th birthday. Beautiful run with mountains on one side and the ocean on the other. I also love doing the New Town Triathlon each year.

What is the most challenging moment you’ve had during a race?
The last 30 miles of the bike at the Louisville Ironman were BRUTAL…headwind, crosswind, rain, cold. Sometimes the crosswind gusts were so strong it pushed me across the traffic lane.

What is your favorite place in or around St. Louis to train?
I love going for a run from home in south city. There are so many trails and parks I can get to…Grant’s Trail, River Des Peres Trail, Forest Park, Tower Grove, and Francis Park.

What is your favorite thing about triathlon?
I love the variety and the challenge. There are so many different pieces to the sport, so it’s always fun and always something to improve on.

What is the one piece of tri-geek gear you can’t live without?
Love my Garmin Forerunner 935

Tip for new (or veteran) triathletes?
Go to the mentoring sessions, ask questions, and train with new people. I’ve met so many awesome people through the sport and through the club!