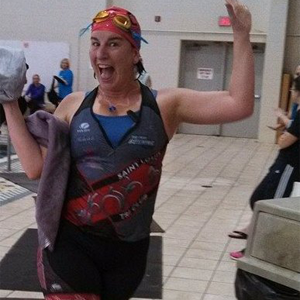 I am Dianna Rockwell Shank. Originally from the Seattle area, I came to St Louis by way of Tokyo and Mississippi and currently teach writing and literature at Southwestern Illinois College. A former runner (17+ marathons), I finally figured out the real fun was in triathlons! I live in downtown St Louis with my husband, Jim, and my four-legged running partner, Stella the wonder dog!

When/Where was your first triathlon?
In 2012, I raced at the St Peter’s Rec Plex and the Jewish Community Center — I got hooked!
What is your favorite race?
I adore the Litchfield Triathlon so much! Racemaker puts on a great triathlon and I appreciate that there is an Athena Division at this race. For someone like me who is plus-sized, it is nice to have a competition among other strong, amazing, curvy athletes!
What is the most challenging moment you’ve had during a race?
During the Augusta Half Ironman 70.3 this past September (2017) I wanted to give up during a very hot and humid run/ jog/ walk/ crawl. But I didn’t. I pushed myself further than I had ever pushed myself. Looking back, I know that a lack of good training and and an ongoing motivation problem led me to such a difficult moment. But I also know that I have the mental game to bring it when I need it!
What is your favorite thing about triathlon?
I love the amazing friends and people that I continue to meet in this sport! I ran marathons for a long time (17 of them!) and I never really met anyone. Being a member of the St Louis Triathlon Club has been on the best decisions I have ever made!