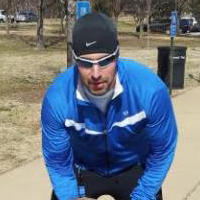 I was born outside of Boston, moved to Charlotte, NC when I was 15. After college I moved to DC to work for the patent office. I decided to do triathlons during a long run while I was training for my first marathon in 2009…only running was getting boring. While in DC, I met Susie who is from St Louis. She moved back here after school and I followed her here not too long after. I found the St. Louis Tri Club webpage and stalked it long before I started looking at places to live in St. Louis. I even raced the New Town Triathlon in 2010 before I moved here.

Where and when was your first multi-sport event? I did my first sprint triathlon in May of 2010 right outside of Charlotte. I panicked during the swim and floated on my back for more than half the swim. I was beat after the swim and had no idea how I was going to make it through the bike and the run but I did. When I crossed the finish line I couldn’t wait for the next one so, I signed up for races the next three weekends.

Where are your favorite places to train St Louis? My favorite place to ride would have to be Wildwood. As far as running goes, I usually stick to the streets of South City since I’m not a fan of driving somewhere to run.

What is the worst food you’ve ever tried in training or racing and why? During one of the New Town races, I tried HEED at a water stop. It was warm and was not a taste I wanted in my mouth while I was running in 90 degree weather.

What is the one piece of tri-geek gear you can’t live without? Speedfil…I’m a heavy sweater and need lots of water.