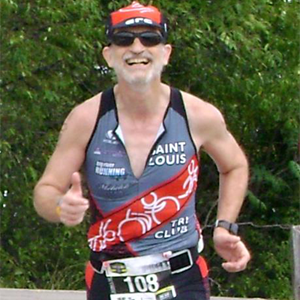 A former distance runner who went “dormant” for 25 years, I got up off the couch in October 2010 and lost a lot of weight for health reasons. During one morning jog the next spring, when pondering what I would do now for weight and health maintenance, I found myself literally in the middle of the St. Peters Spring Triathlon. I got home and, after Googling to find out just what that thing was, thought to myself “Gee, I wonder if they have these for old, slow people?” Surprise! In the fall of 2011 I had joined the Club, not yet having done a triathlon of any kind and with a mind like a sponge. Since that time, the members of this Club have helped me through many personal firsts. A high point was in the summer of 2013 when a group of ten of us went to Ironman 70.3 Steelhead, where four of us who had trained together completed our first half Ironman! More recently, I was proud to be a member of Team USA for the ITU Long Course World Championship in Oklahoma City. I enjoy racing at interesting places. A favorite was RocketMan Florida, with the bike ride being on the Kennedy Space Center. I have a goal of doing a race in all five of the Great Lakes in one season. Just have to pick the year!

I have been astonished at the camaraderie I find in the triathlete community in general, and the Club in particular. The Club offers an amazing variety of activities, all due to the efforts and willingness to share of so many members.

What is your most/least favorite gel flavor?   Mandarin Orange during the summer is my favorite. TriBerry is the worst!

Where are your favorite places to train St Louis?  St. Peters/Laurel Park running trail, because it’s home. Castlewood and Queeney Park because trail running is COOL!

What is the worst food you’ve ever tried in training or racing, and why?  The vanilla Heed I poured over my head at Litchfield because I thought it was water. Got to smell it through half of the 10k.

Where and when was your first multi-sport event?  November 2011, Rec-Plex Indoor Tri Challenge. Obsessed about it for weeks beforehand.

What is your favorite thing about triathlon?  The part right before the finish, where I catch up with the people who run like I swim.

What is the one piece of tri-geek gear you can’t live without?  BodyGlide, definitely.