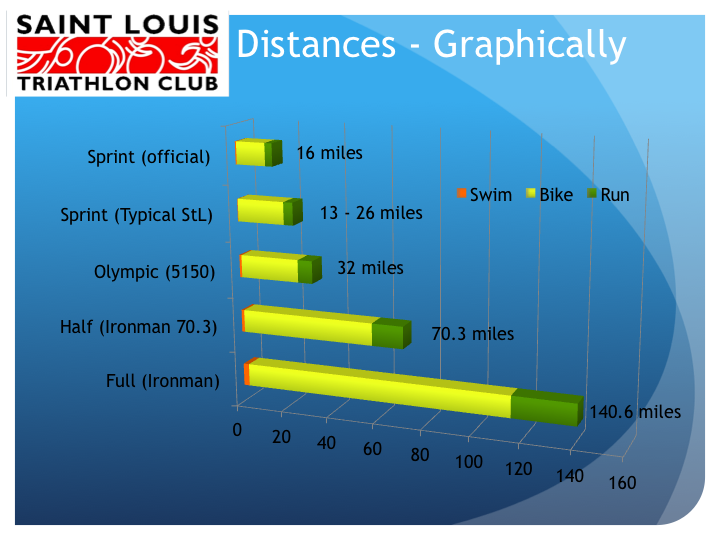 So, How Long is a Triathlon?

New triathletes are often confused by the different race distances, and the names associated with them. Look up a description of a race and you are likely to find “sprint”, “standard”, “Ironman™”, “full”, “half”, “long”, “super sprint”, and “something between a sprint and an Olympic that is run on Fathers’ Day”. Gee, the sport seems hard enough without all of that confusion!

So how can we sort this out?

First of all, Wikipedia actually has a very comprehensive listing of the “official” distances. Look at the table labeled Race Formats. This table pretty much has it all, but it’s a lot of information. Let’s see if we can break this down a bit further.

There isn’t a real requirement on length to be a triathlon. It just needs to be a race consisting of three different legs with timed transitions in between. We’re pretty much used to swimming, biking and running, and pretty much used to that order. Doesn’t always have to be that way; winter triathlon is often running, mountain biking, and cross-country skiing. And one race of the American Triple-T multiple day event is bike, swim, run.

But, for the most part, it is: swim, bike, and run. And in the US, we usually see four distances. We’ll concentrate on these four, and at the end mention a couple of others you may see. These four are:

A couple quick of notes about these distances:

Here is the same table, but with everything in English units.

Let’s take a look at that graphically.

You’ll notice that there is another line on this figure, “Sprint (Typical Saint Louis)”. Here is the thing about the sprint distance: the official sprint distance is very seldom run. Exceptions would be larger races such as the USAT Age Group Sprint National Championships and the USAT Club National Championships. Most local races that label themselves as “sprint” do a much shorter swim than the 750 meters, typically 300 to 500 yards, then often add a longer bike leg and sometimes a longer run leg. Here are the lengths of local Saint Louis “Sprint” races held in 2013, compared to the official sprint distance. 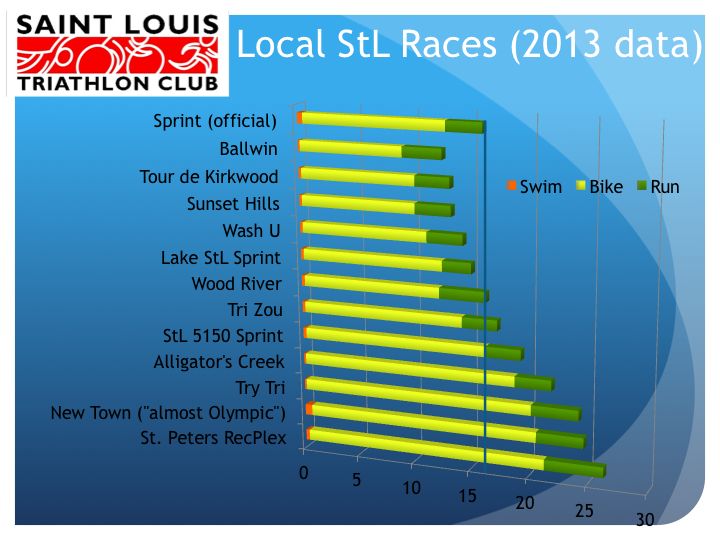 So as you can see, a “sprint” can be of varying distance. As an aside, it is also worth mentioning to beginner triathletes that the distance doesn’t tell the whole story about what a race will be like. For example, the two longest races shown here, St. Peters RecPlex and New Town are both in northeast St. Charles County, an area notable for being flat (which, though, can also mean windy on the bike). Lake St Louis and Alligator’s Creek are in the opposite corner of St. Charles County, an area noted for being hilly. Hence the latter two races are shorter, but will involve more hills. So if you want to know what to expect in a given race, read those race reports and ask your fellow Club members!

On the other hand, if a race is advertised as “Olympic”, “Half/Ironman 70.3™”, or “Full/Ironman™”, the expectation would be that the race director is attempting to present a race with the distances normally associated with that name.

You may also be wondering what percentage of time you are going to spend in each leg. For the two longer distances, it usually looks something like this: 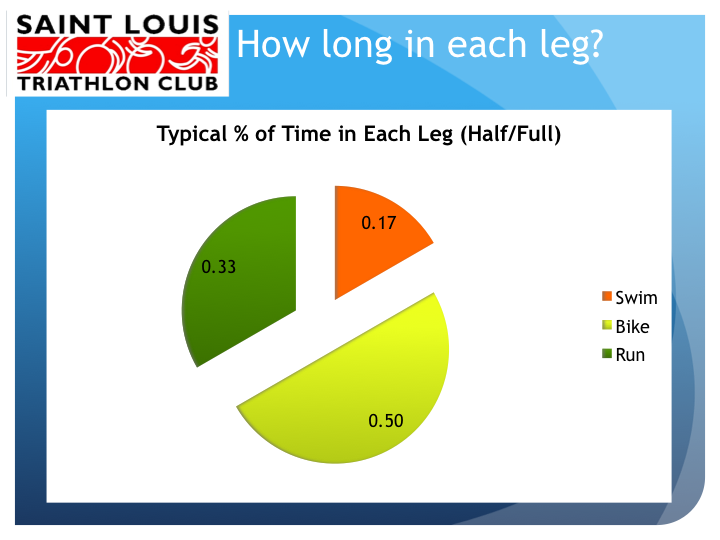 So you would expect to spend about half your time on the bike, a third on the run, and a sixth on the swim.  For the (official) sprint and Olympic, the ratio of the swim would be a little bit higher because those two races have a higher percentage of the race in the swim. In fact, for those who have done the Olympic distance and are considering trying the Half distance, and who like many triathletes may not consider the swim to be their strong suit, you might want to note that the Half swim isn’t that much further than the Olympic – 1.2 miles versus 0.93 miles. You’re almost there!

Finally, we promised at the beginning to describe two other distances you may hear about. The first of these is the Super Sprint. Like the Sprint, it gets used in more than one context. First, it may be applied to a race that is approximately half of the official Sprint distance, i.e., somewhere around 375 meter swim / 10 km bike / 2.5 km run. That’s a really fast race! Second, it applies to a new pro/elite race format, where the athletes actually do two circuits of the Super Sprint Distance – six legs, and five transitions. Third, and most likely to be run across locally, is that a Super Sprint race will be a race that is shorter than the associated Sprint race that is going on at the same time.

The other distance you may hear about is the Long Course. This is a distance that is raced internationally under the auspices of the International Triathlon Union (of which the USAT is a member). The ITU administers world championships at two distances – the “Short” or “Standard” course, which we noted before are other names for the “Olympic” distance, and the “Long” course, which is triple the Olympic distance (this is why the “Long Course” is also called the “O3”). So the distance for the Long course is 4000 meters swim* (2.4 miles), 120 km bike (about 75 miles), and 30 km run (18.6 miles), for 95.6 miles total. In the linguistic world of triathlon, “Long” lies between “Half” and “Full”.

*Those paying close attention would notice that 4000 meters is not 3 times 1500 meters. I am guessing that nobody wanted the Long course swim to be longer than the Ironman™ swim.

You will be hearing about the Long Course World Championships because in 2016 they will be held in the US at the Redman Triathlon in Oklahoma City. The US qualifier for that race is the Half at Redman in 2015. So, yes, the “USAT Long Course National Championship and World Qualifier” is actually a Half. Is this a great sport, or what?

And there you have it, race distances in a nutshell.