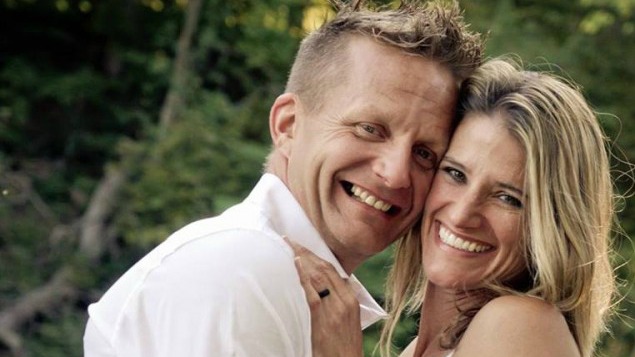 One of my favorite writers, Jane Austen, once wrote, “It isn’t what we say or think that defines us, but what we do.”  For those of us involved with the sport of triathlon, it can be quite a struggle to “do” this sport, balancing children, a partner, and jobs.  This month’s featured members – Lynne Marsala and Dave Pitts – “do” an admirable job of harmonizing all of these responsibilities.  And it isn’t just that they are raising four children between them while negotiating busy work lives.  How many people can claim to “do” a triathlon and then – just hours later – “do” a wedding ceremony at that very same race venue?

As many of you might know, Lynne and Dave married (with the entire triathlon club watching either in person or via pictures) on September 12, 2015, after the completion of the USAT Club Championships in Innsbrook, Missouri.  This love story has a coincidental beginning.  Even though they wouldn’t meet until years later, both Lynne and Dave were born in the state of New York only 2.5 hours apart.  After being born in Niagara Falls, Dave’s family moved to Florida where he grew up during the popularity of distance running and started running at an early age.  He was an amazing 11 years old when he ran his first 10K and was a mere 16 years old when he completed his first triathlon (Escape from Fort DeSoto).    After a stint in the Navy, Dave traded triathlon bikes for racing motorcycles but then when a friend invited him to a triathlon in Effingham, he not only raced and went all out – he podiumed.  Meanwhile, Lynne – who had been active as a gymnast – was signing her son up for a triathlon camp when her friends, Deb and Peter, and later, Becca, played instrumental roles in her giving triathlon a try (Memphis in May).  After getting a divorce in 2007, Lynne started running ½ mile a day, eventually building up her stamina and completed a 5K: “I then wanted to get faster, so I ran more.”

Together, these two athletes are an awesome force.  Just to prove to you, dear reader, that these two folks were fated to be together, I will even point out that they even share a lot of similarities: “We both have two kids and have been divorced, and we even have similar injuries.  We both have separated shoulders, fused vertebrates.  We think our mothers were separated at birth.”  Further, they are both working to help other people.  Dave, a firefighter/ paramedic in St Charles, and Lynne, a biologist and cancer researcher at Washington University, spend all their free time with their amazing children when not working or training.  What I find so commendable is their ability to balance out these many aspects of their lives.  Lynne argues that, in fact, it is easier to for them since they are both triathletes:  “We have a live-in training partner who places the same value on training time as the other.  We love training together and do it as often as possible.” 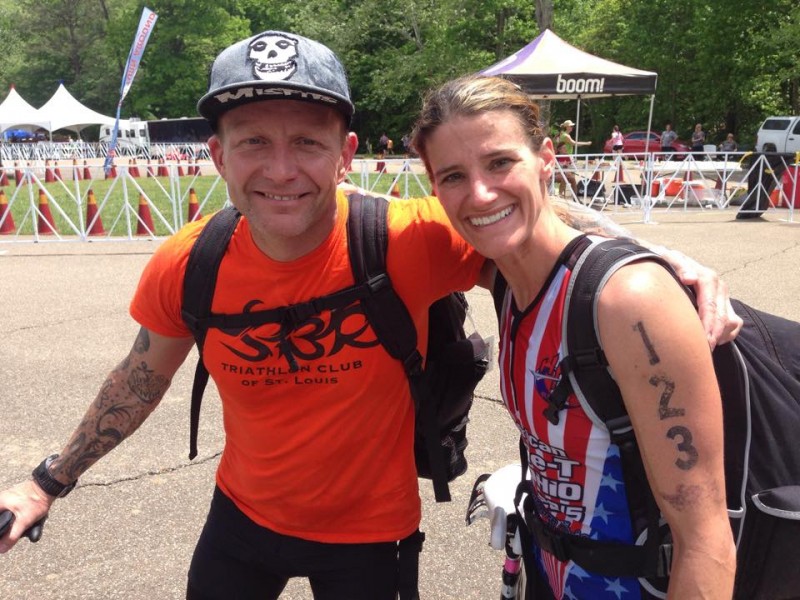 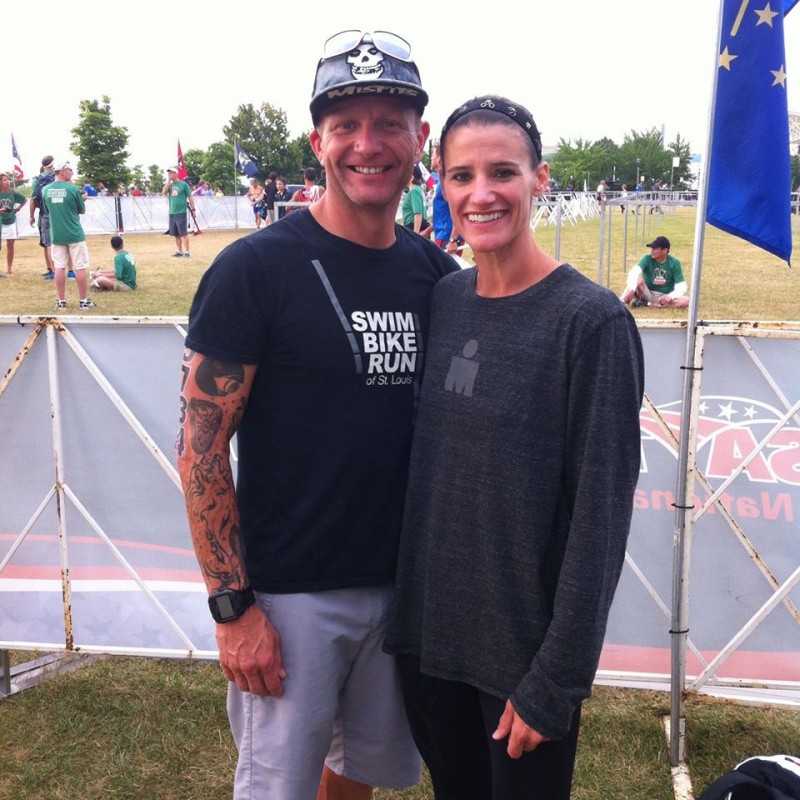 So how could any of our single members in our club get the chance to meet their potential mates?  Lynne noted some great advice:  “The triathlon community is a great place to meet people for friendship and potential mates.  Triathlon races, however, are not a great place to meet potential partners because you are there and focused and don’t recognize people under the goggles and helmets.”  She added that it is more effective to join “Ironman Singles” on Facebook if you are looking for someone with the same athletic interests as you!

One of the questions often asked to successful triathletes deals with training, especially during the off-season.  While Dave answered this question with an ominous “According to my wife, my training plan is something I wouldn’t prescribe for anyone other than myself” (eek!), Lynne believes that she has found balance with winter training, something I know that many of us need help with.  According to Lynne, “I do CrossFit 2 times, run 4 times, swim 1-2 times, and bike 2 times per week.  The time or distance varies and depends on what feels good.”  Once the racing season starts, her serious training involves no CrossFit and “I run 4 times, bike 3 times, and swim 3 times per week.”  In terms of Dave’s off season, he tends to reduce the volume on the disciplines that he has strength in.  So, for him, a lot of running happens in the off-season!  While he enjoys running and cyclocross in the fall and winter, he “hammers” his workouts each time:  “Most of my cycling is interval work on the trainer, 3 days a week in the pool, and running 4 days a week.”

Little known facts about this couple?!  Dave has his USAT certification and Lynne judges gymnastics on the weekends all winter including college meets.  Did you know that Dave is an artist and that Lynne plays the clarinet? 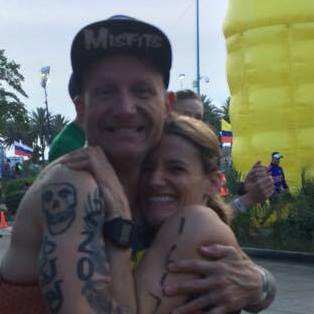 Since I started this focus on Lynne and Dave with a nod toward Austen, let me add one more quotation from this esteemed writer:  “There could have been no two hearts so open, no tastes so similar, no feelings so in unison.”  Austen could very well be talking about these two triathletes in our club.  I see two hearts in complete unison!  And if you haven’t met these two lovebirds yet, I hope you get the chance soon! 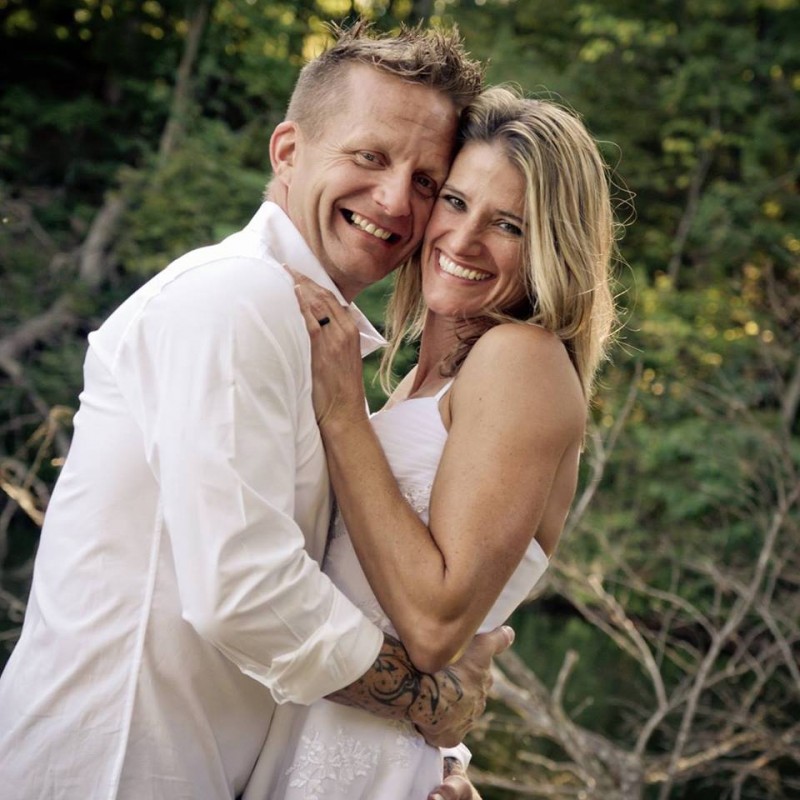