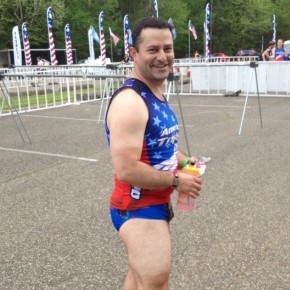 I started my triathlon life in 2009 by doing an indoor timed tri and then having surgery to relieve the compartment syndrome condition in my calves so that I could run for more than 20 minutes. In 2010 I completed 3 super sprint tris and had to run-walk my way through all of them. In 2011 I did 2 sprints (still intervalling the run) and in August decided to take the big plunge by registering for Ironman. In 2012 I finished 2 sprints (finally running run!), a half, and Ironman Coeur d’Alene. In 2013 I finished 1 sprint, this crazy event called Triple-T (a super-sprint, 2 olympics (hey, there’s my first olympic!), and a half in 1 weekend), another olympic and 2 more halfs, and Ironman Arizona. In 2014 I’m gearing up for my first endurance tri, a 10 hour sprint! You should ask me about it! My point to all this is… you’re stronger than you know! Come train with me and find out!

My favorite race: The ones I don’t finish last in my age group.

My most challenging moment you’ve had during a race: The swim during the second olympic at Triple-T. It was a very mentally dark experience. I swam with my eyes closed, trying to pretend I wasn’t doing what I was doing.

What is your favorite place in or around St. Louis to train? Swim – Shaw Park, Bike – Columbia to Prairie du Rocher and in Calhoun County, Run – Forest Park.