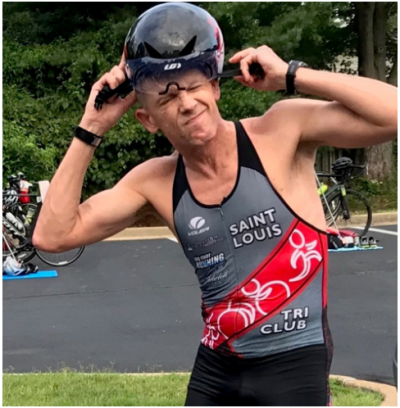 Though I’ve been a runner since junior high and a rower briefly during college, the addition of swimming
came when running friends and fellow swim meet parents convinced me that taking up swimming
would help me improve my running (true, it did).  That led to hanging around triathletes, the purchase
of a decent bike, and the next thing you know, I entered a race.  When a company merger/job move
brought me from Richmond, VA, to St. Louis in 2008, I found a few tri races in this area, but I trained
mostly with other Virginia athletes who had made the move here with me. Looking to upgrade my
knowledge, training, and gear in preparation for Louisville Ironman in 2011, I joined STL Tri Club in late
2010.  Highlights of my time with the club have included that Louisville Ironman race (my only 140.6
completed so far) and our team just missing top place at Club Nationals when they were held nearby
(Innsbrook, MO) in 2015.

When/Where was your first triathlon?
A sprint-distance race in Richmond in May 2006.  Interestingly, another group held their race on the
exact identical course in July that year.  Having studied lots of my mistakes from the first one, I was able
to fix many of them and went five minutes faster on my second attempt–very satisfying.

What is your favorite and least favorite gel flavor?
Don’t usually do gels, but my bike’s bento box is filled with Twizzlers (red and black) for longer races.

What is your favorite race?
The first race of the season.

What is your favorite place in or around St. Louis to train?
Whispering Hills for swimming; Clayton Road for group rides; Queeny Park for runs (although Forest
Park Thursday a.m. Tri Club runs come close).

What is the one piece of tri-geek gear you can’t live without?
Road I.D.

Tip for new (or veteran) triathletes?
Follow a gear packing checklist before leaving for every race (no matter how long you’ve been doing
this); and be sure to update that packing list as you learn of better things to bring.