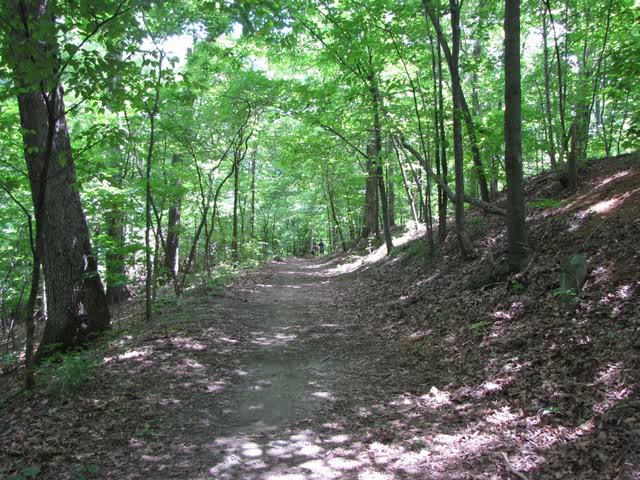 Thank you to our At-Large Exec. board member Justin Farishon for contributing this article!

Mother Nature is not the only one changing seasons in September.  For most of us, Fall represents a transition from triathlon season to a second love, be it trail running, cyclocross, the offseason—whatever it is we look forward to after tri training is done.  The earth’s seasonal transition is highlighted by vibrant colors.  What better way to enjoy the changing of the leaves than to be out amongst them?  Trail running is a great way to get outside when the weather turns cool.  It also helps you improve as a runner by giving your body new challenges to adapt to.  We’ve put together a few tips to help you get started on your traipse through the woods.

The Truth is that you don’t need trail shoes to run on any of the area’s trails.  The truth is that trail shoes make your experience much more enjoyable, and you’ll probably see performance improvements if that’s something you’re striving toward.  Any trail shoe worth its pretzel salt has certain features designed to help you tackle the rugged terrain you’ll encounter.  For starters, the sole should have large lugs that help you dig into the soft ground or loose rock to prevent the shoe from sliding out from under you.  It should also have a pretty solid toe box to protect your toes, particularly your big ones, from those times when a rock or root jumps up at you.  It shouldn’t feel as heavy as a steel-toed boot, but it needs to be something more robust than what a street shoe offers.  A gusseted tongue is another feature to look for: it’s a tongue that’s sewn into the shoe almost all the way to the top.  This prevents dirt and rocks from sliding into your shoe from the upper.  Trail shoes should be very breathable.  This encourages you to splash across that creek and not worry about squishing around for the next five miles.  The water drainage and breathability of the best trail shoes allow for quick drying and comfortable traction shortly after encountering water.  Finally, knobby laces are nice but not at all essential.  They serve to provide a tighter lacing connection so that small twigs and the like don’t pull on loose laces and untie them easily.

You should probably wear a shirt when trail running.  Guy or gal.  We do occasionally see shirtless folks running the trails, but with the amount of wildlife (e.g., ticks) and natural obstacles (e.g., branches, poison ivy, oak, sumac, etc.) you’re likely to meet, a little protection won’t hurt.  Sleeveless shirts are not the best solution for the same reasons.

The ideal sock for trail running is one that comes above the ankle.  You don’t need your grandfather’s crew sock that comes up to your knee, but you generally want protection from the stuff that is closer to the ground.  Also, you want a tight cuff to thwart dirt and rocks from collecting inside.

Visors are sometimes a better option than hats because trails usually have lots more vegetation than you find running on streets.  More vegetation means more humidity.  This is less of an issue as Fall wears on, but on a hot day, allowing the heat and humidity to dissipate might make you more comfortable.  There are plenty of hats that are made with breathable materials these days, though.

You’ll probably want to bring a change of shoes and socks for the drive home.  A clean pair of trail shoes means they’re either brand-new or not used enough!  A towel to put on your seat may also prevent some unwanted dirt from migrating from the park to your car.

Runners aren’t the only ones out enjoying the natural beauty of these trails.  We often come across mountain bikers and hikers on some of the most popular routes.  If you’re on single track and you encounter a mountain biker(s), it’s proper etiquette to step off the trail and allow the bike(s) to pass.  It’s far easier for a runner to stop and take one step to the right than it is for a biker to disengage and put on the brakes.  It’s useful here to ask a biker how many more are coming, as you may be on one of the countless blind turns that make trails so interesting.  (A PSA for all bikers: volunteer this information.)  Bikers behind you should let you know verbally that they are coming up.  Offer the same courtesy to hikers who are ahead of you on the path.  “On your left,” “runner behind,” and “trail” are common phrases that alert those in front of the presence of someone faster than them behind.

Single track means just that.  If the path is narrow, please be mindful of other users and go single-file if you’re in a group.  If you need to stop for some reason, take one step (but no more—see  below for preservation) off the path to clear it for others.  It is quite unnerving to rush upon someone stopped on the trail.

I’d be lying if I told you that getting dirty wasn’t one of my favorite reasons to hit the trails.  The sense of being brought back to our childhoods by splashing in creeks and puddles and playing in mud is a joy we don’t get to experience often once in adulthood.  But that doesn’t give us carte blanche to do what we want when we want on the trails.

It’s poor form to be out on the trails, especially the single-track dirt ones, shortly after heavy rainfall.  Not only can it be dangerous (erosion can cause a rock slide, for example) and frustrating (have you ever tried running fast in mud?  It’s hard.  Very hard.), but it also damages the integrity of the trail itself.  Give it some time to dry out before attempting a run.

Muddy or not, we should never leave the trail’s path to go “exploring.”  Most paths are quite obvious in their cut apart from the surrounding environment.  If you’re trying a new trail, you’ll first want to consult a map online to get a sense of where the path leads generally.  You’ll also want to check the maps at the park’s visitor center or on the trail head.  Going off-path can lead to some pretty unappetizing battle wounds.  Remember when we advised you to wear a shirt?  Think about ticks, poison plants, and other flora and fauna that might bring unwanted consequences.  Straying also can damage the surrounding environment.  Leave the exploring to finding new parks and trails and going new distances and speeds.

Do we even need to mention that you should leave no more than your footprint and take nothing more than a picture?  Well, we just did, but it’s always worth reminding.  Littering is not just a crime; it impacts one of the primary reasons we seek out the trails by detracting from their natural beauty.  And there are reasons both moral and practical that we should never take anything from these parks.  See, e.g.: ash borer, emerald.

Running on a trail is both like and unlike running on a road.  They are similar in that both involve putting one foot in front of the other at a speed faster than walking.  When it comes to other aspects of your form, though, there are significant differences that make trail running a challenge.  But it will certainly serve to improve your running economy for the next time you hit the roads.

Perhaps the most important thing to do when running on a trail is to land softly with your feet.  Yes, you should be striving to do this every run, but be particularly mindful of it on a trail.  You’ll be landing on soft soil or loose rocks or roots.  The harder you land, the more you displace whatever is underneath your foot.  You’re more likely to have the ground slide out from under you if take steps like the Incredible Hulk.  One of the nice ancillary benefits of trail running is that it usually takes less of a toll on your ligaments, joints, and muscles than running on the road, but you diminish that benefit with a hard landing.

Because you’ll meet plenty of rocks and roots as you go along, it’s also good to pick your feet up and bring your knees a little higher than you would on the road.  This is in direct competition with landing softly—the higher you bring your knees and feet, the further they have to go to meet the ground.  The further they have to go, the more momentum they gain.  This is part of what makes trail running challenging.  It’s also why running on trails will make you feel like Roger Bannister the next time you run on a flat, paved surface.

To prepare yourself for those soft landings and to know when you need to pick up your feet more, it’s a good idea to look only about 10-20 feet ahead of you when you’re running.  You’ll be able to spot the troublemakers on the path in enough time to adjust your gait.  On a related note, you’ll need to chop your steps more frequently to avoid tricky landing spots.  This can impact your rhythm.  Try to use your breathing as your internal metronome rather than your strides, and return to your natural gait when the path allows.

One last minor point: I’ve swallowed enough bugs while running to equal the ideal protein-to-carbs recovery nutrition intake.  If you’re comfortable with it, you can breathe in through your nose and out through your mouth to avoid an unwelcome amuse-bouche during your run.

Henry David Thoreau wrote, “Heaven is under our feet as well as over our heads.”  There is no better way to enjoy nature than to be in it, among it, and with it.  Hopefully this guide will help you find the heaven under your feet.  Now go splash in that creek and earn your pumpkin beer.