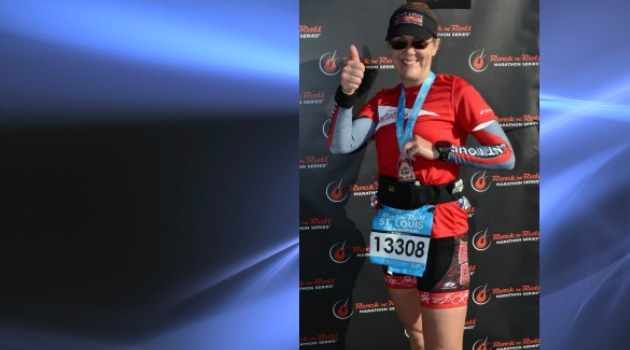 When you hear the name Marian Holtz, one word comes immediately to mind — MOTIVATED! She not only works hard but plays harder! You would think she has been racing triathlons for years, but last year she dove head first into this sport with no looking back. Her positivity and enthusiasm while volunteering at races can be heard from a distance and when she isn’t volunteering, she is putting her race plan into practice to hit a new personal record. In fact, even on vacation, she signed up for a 10k “just for fun” and ended up taking 1st place in her age group and a cash prize. At the end of the day, luck is not something Marian truly relies on, but her preparation leading up to a race and her homework that was completed, double checked and triple checked right before a race. She gets into“Beastmode” and there ain’t no stopping her now.

Marian is a true St. Louisan, who grew up in Webster Groves and then moved from South County to West County by the gorgeous Creve Coeur Park. She has worked in IT since college and she lived through the transformation from Southwestern Bell Telephone to SBC to the present AT&T. Today she leads a team of developers who maintain the myAT&T website used by all AT&T customers, as well as the myAT&T mobile site and app. During her breaks at work, she makes time to get in a yoga session, or a swim. She lives and breathes triathlons and learned of this addictive sport back in the fall of 2013, when she happened to meet and strike up a conversation with St. Louis Triathlon Club member Peter Gonzalez. She was fascinated by  multi-sport races and the logistics of transitioning from one sport to the next. At this same time, she was on a quest to lose weight and get in shape and by March 2014, she had lost about 20 pounds and was ready to see if running was something she would enjoy, knowing that her love for biking and swimming was already strong. She had never run before and wasn’t sure if she would have the endurance for long distances. It was tough at first, she says, but by April she crossed off her first goal in the running discipline — the Go! St Louis 5K in Forest Park.  She was hooked! “The energy and the thrill of running with so many others energized me and I wanted to do more”, says Marian. A few clicks of the mouse later on the internet, Marian signed up for Big Shark’s Go Big Triathlon Training program and became a member of the St Louis Triathlon Club.

She was on a quest to conquer her first triathlon. “I knew right off the bat that I couldn’t do this alone and the Go Big Training was great for group sessions, but I knew I needed more group support and the St Louis Tri Club was just what I needed. At my first group activity, St Louis Tri Club member Tim Struyk stepped in and offered great tips at the Sunday morning Whispering Hills swim session.”. Like Marian, the transformation that occurs with a triathlete cannot be possible without the unconditional support from our tri club and many of us in the club have been helped and therefore pay it forward to help others put their fears aside and accomplish the impossible. This is the beauty of our club’s members that range from first timers to double digit Ironman finishers. Marian also took full advantage of the Tuesday evening IronBrick-sponsored bike and run sessions at Creve Coeur and also the Thursday evening Tri club group mentoring bike sessions at Forest Park. All of these activities are free to members and in addition to the gear, you are only asked to bring your relentless optimism. “I quickly became addicted to the thrill of racing” says Marian, “and even though I may fret beforehand about something going wrong, I am right there with my fellow club members, smiling through the sweat and pain, and then after the race, plotting the next one”. With the club, Marian has met people who she shares this addictive pastime of triathlons with, but also has made life long connections with many who race, cheer and volunteer. Marian always talks about wonderful memories volunteering at local and Ironman events. It really gives you a feel for what is involved and you take it all in before signing up yourself. Last year she volunteered at Ironman Louisville, Chattanooga and Boulder as well as at the finish line of Border War’s inaugural 70.3 distance. Even though she raced several triathlons in her first year including sprint distances at New Town, Tour de Kirkwood, Trifecta at Carlyle Lake and Lake St Louis, and the olympic distance at Litchfield, she feels her biggest win was building life long friendships within the club and that support system fuels the fire for more and more challenges in the near future. She is signed up for the 70.3 relay in Ironman Chattanooga with Heather Reed racing the swim portion, Traci Isom racing the bike portion and Marian racing the run. Penned down in Marian’s 2015 race calendar is her first solo 70.3 at Ironman Racine. 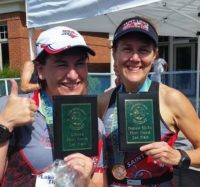 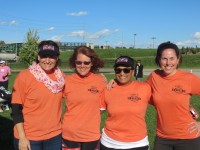 All smiles after her first half-marathon

Motivation does fuel Marian’s fire, but practice, practice and more practice keeps her on race plan and injury free. As stated before, she started out in a training program with Big Shark which lasted from April 2014 thru the beginning of July and she built a great foundation with key concepts on swimming, biking and running. But to invest one’s self into a long term training program, she knew she needed to hire a coach. At the Tuesday night IronBrick events led by coach Paul Schon, Marian humbly says “He must have seen something in me because he took an interest in helping me, giving me wonderful tips for all three disciplines (swim, bike, run), which I use today each and every time I train. Once my Big Shark training concluded, I signed on with Paul as my coach, which was one of the best decisions I made. Even though I am focused on racing, left to my own devices, I don’t have the discipline or the knowledge to train effectively on my own. So having Paul as my coach keeps me on track. I love his training style. He knows me and what resources I have available to me and he tailors my training plan to my goals. He is always available to ask questions and, as a member of the Tri Club, I am able to train with him at group events as well as at special IronBrick training activities that he sets up – so I am not always “on my own”.  He knows that I have conflicts and I can easily work with him to rearrange my training activities to better fit my schedule – especially in regards to pool times. For me, a training program was critical because I know, on my own, I would let things slide and I also wouldn’t know the best variety of workouts to include to ensure a balanced program. Having a coach experienced in all aspects of triathlon (training, racing, nutrition, injury prevention) is invaluable and I am extremely lucky to have such a knowledgeable coach, who is an Ironman himself and has raced ten 140.6 and at least sixteen 70.3 events.”

So I asked Marian, now that she is no longer a rookie, what could she share with newcomers in the sport: “My biggest advice to beginners is to join a club or training group because this sport can be tough and you need a lot of support and motivation to keep to a training plan, learn the ropes and complete each race you sign up for. Once you are a member, get involved! Attend club events, group rides/runs, mentoring opportunities and take advantage of the facilities available to the club such as the Whispering Hills swim access available to the Tri Club members. Also, don’t be afraid to ask questions and don’t ever think that an event or activity is just for the more experienced members. Every member is always welcome and no member is ever left behind. Attend the monthly member meetings so that you can meet as many members as possible – everyone I have met, no matter their level of experience, has been super friendly and eager to help fellow members. Finally, use the club’s website and facebook pages to find great articles as well as key information about events, races, discounts, gear, and also group activities such as weekend bike rides or group runs. ”

At home, Marian has two of the sweetest kitties Nicki and Nola, who keep her company before she goes to work and are always waiting for her when she returns; she adopted them together from the same litter at the APA in 2008. “They are bob-tails and I call them my little bunnies as they look very much like bunnies hopping and running through my house. Two of the cutest kitties I could ever ask for!” says Marian, with that signature smile.

(Thanks to club member Graziella Amarasinghe for this profile on her good friend, Marian)