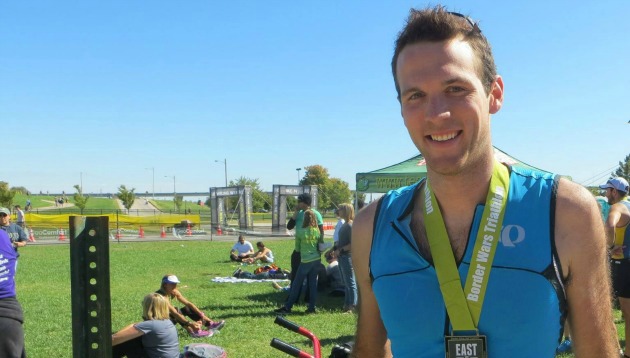 “Success is a journey, not a destination. The doing is often more important that the outcome” – Arthur Ashe. So many of us in the St. Louis Triathlon club embark on such a journey. Whether it be a sprint, olympic, half ironman or full ironman triathlon distance, we invest sweat, blood and tears to succeed. But, what does success really mean to you? What about the journey resonates with your soul? Who do you meet on this journey and how does it change you AND them?

James Arpin is one such athlete on a journey. He wants to lead by example, and wants to help people, however he can, to enjoy this so called LIFE, which we sometimes take for granted. If you ask James if he always considered himself an athlete, he would smile and think back to good ol’ college days, when he was an aspiring pre-medical student, with the hope of one day being able to help patients regain their health. And yet he internally struggled with investing in his own health. Join us in learning how he turned his life around.

James grew up in Hutchinson, south central Kansas — the origin of the Kansas state fair and a hand full of salt companies. It is about an hour away from Wichita, and for James, Hutch is home. He lived there until he graduated from high school and then attended Kansas State University to pursue a biology degree as the foundation of a pre-med program. James and his high school sweetheart Shelby (also a STL tri club member), both scored big wins when they were accepted at the SLU School of Medicine and at the Washington University School of Medicine programs respectively. And so here they are, in the vibrant city that we know and love. 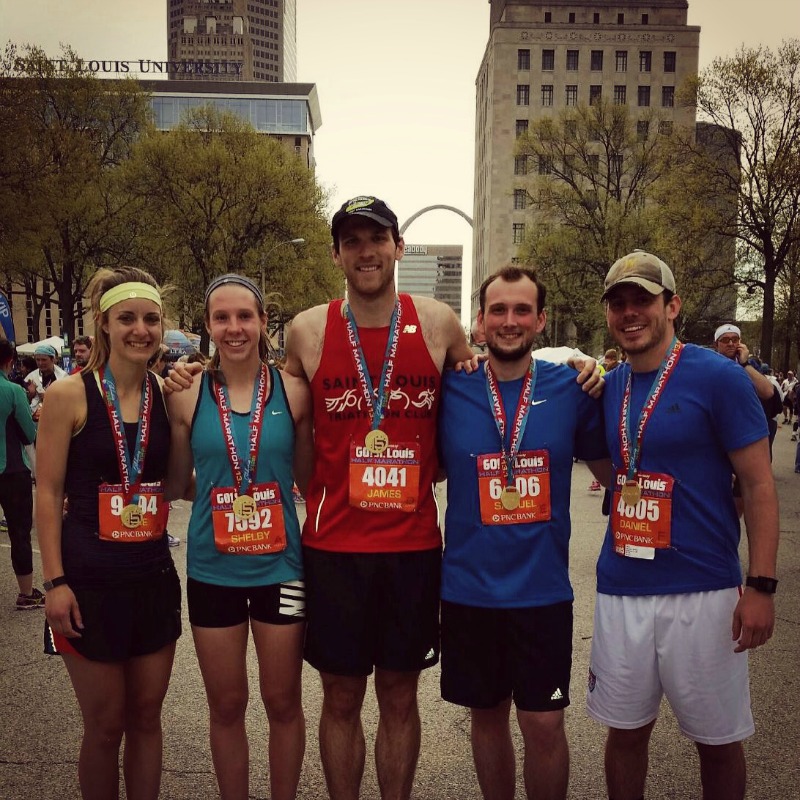 I asked James, why he picked this career path – “I am trying to become a doctor… of some sort… to be determined at the moment. As a first year med student, you get asked the question “So what KIND of doctor do you want to be?” and all I can really tell people is what I don’t want to be. I do know that I want to help others enjoy their lives to their full potential”. How is this different from what each of us do in our triathlete life? It isn’t! Most triathletes are asked, how is racing an Ironman fun? And really, while it may not be fun, and is sometimes more pain than fun, we still do it because there is a fire in the soul that burns strong when we accomplish what we set our minds to do.

In high school, James played tennis and was in the marching band, but wasn’t really dedicated to any one sport. He didn’t care for running or swimming or basically anything that took a lot of effort, even though his body was quite fit. Then college happened and the freshman 30 was all too real for James. By mid-sophomore year, he weighed in at approximately 250 lbs., which was a red flag that sounded all the alarms about what he was doing to his body. “How could I be a doctor, if I can’t take care of my own self? What kind of example would I be setting to my patients?”. These questions weighed heavy on James and with soul searching, he knew he had to do something to change.

“Surround yourself with the dreamers and the doers, the believers and the thinkers, but most of all, surround yourself with those who see greatness within you, even when you don’t see it yourself” – unknown. In Spring 2012, his girlfriend Shelby, a former high school runner, had signed up for their home town triathlon. It was then that James said to himself “I CAN do that too. I WILL show Shelby and myself that I do care about my body”. As triathletes jump head in first into the race, so did James – mind, body and soul. He first started with the couch to 5K program. “Man was that rough” he says, and next he moved onto a beginner training program. He bought a brand new bike with a price tag that made his mom’s jaw hit the floor, but he knew this was his journey and he had a lot to prove. In the summer, he began meticulously counting calories because he started learning how food fuels the training process and what you put into your body oils the wheels for long term endurance performance. By the time the tri came around, he was 40 lbs. lighter and was able to finish in a time that he was “damn proud of”. Even though he recalls having terrible running form and IT band syndrome, he was now HOOKED! “The overwhelming feeling of crossing that finish line, while recalling the journey and all of the hard work that I put in during those prior months hit me all at once and I definitely fought back tears. It is that feeling at the end of the race that drives me to do the next, and definitely one of the big reasons I fell in love with the sport”. And so time moved on and James stuck with his journey while losing an additional 20 lbs. and yet gaining so much more. A rock in his life and someone who keeps James motivated is Shelby, and just the thought of where he was to where he is now in this journey will keep him much stronger and healthier for tomorrow. 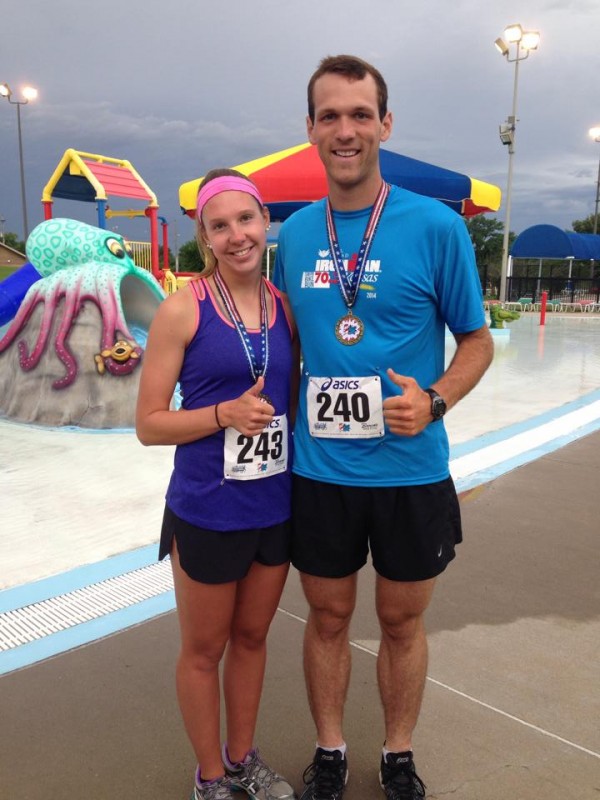 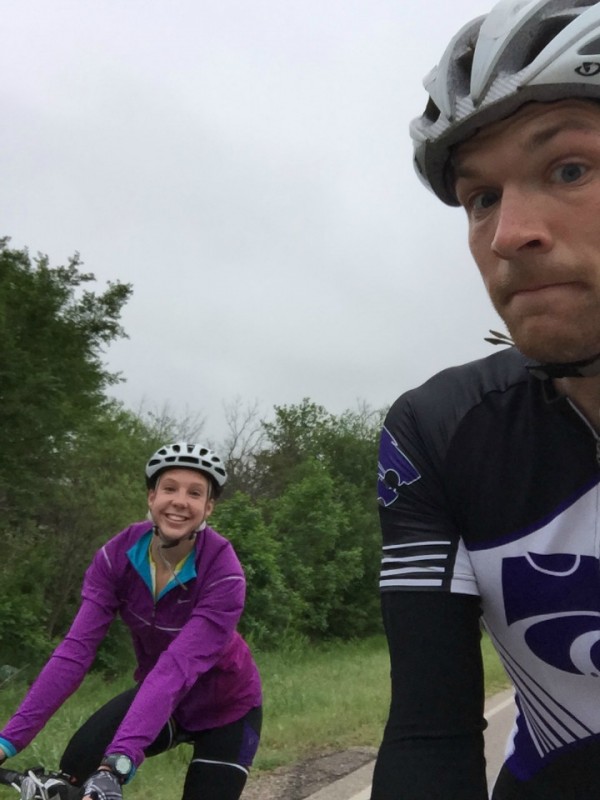 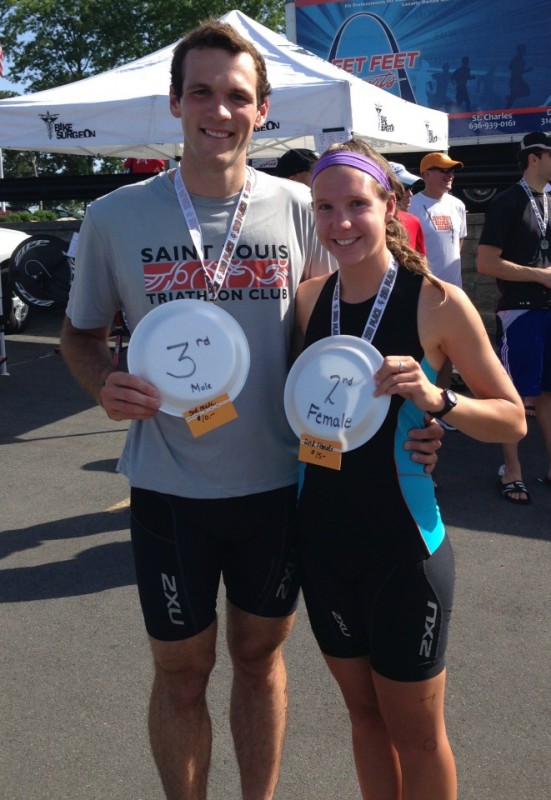 Another huge reason he loves this sport is companionship. “The shared passion of everyone within the sport makes the people I interact with feel like family. Being able to share in other people’s journeys and encourage them to fulfill a goal they may have not thought possible months ago, brings me just as much joy, if not more, than crossing the finish line myself”.

James says he is still so new to triathlon and is still figuring out his favorite distance.  James has completed Ironman Kansas 70.3, Border Wars 70.3 and is signed up for the Legend Free State 70.3 triathlon. “I like the half ironman distance because it is a long race that keeps me busy training, but now that I’ve “been there, done that”, I’m dialed into training for the full ironman distance at Michigan Titanium in August 2015. However, I will say that my hometown’s Salty Dog sprint triathlon is by far my favorite event because of how personal it is. I know just about everyone who races this event, and it is put on in the town I grew up in. It was my first triathlon, and I have done it every year since 2012!” 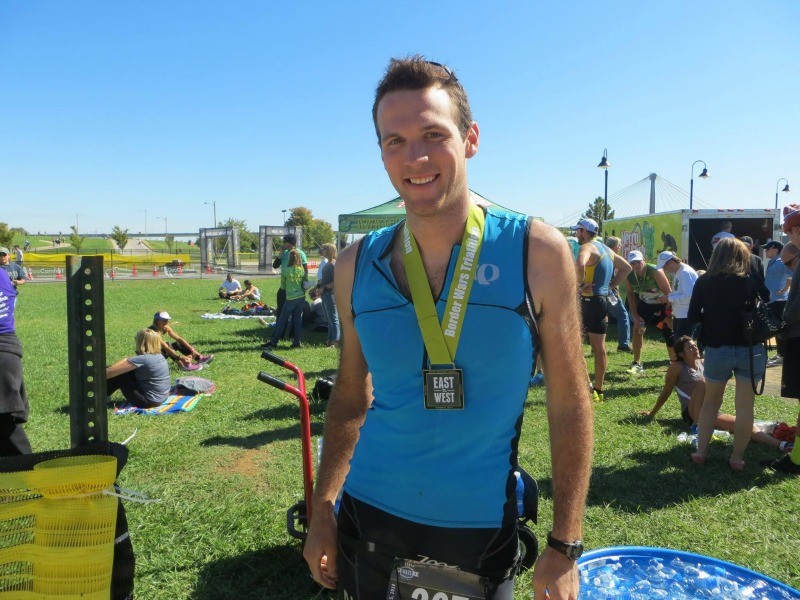 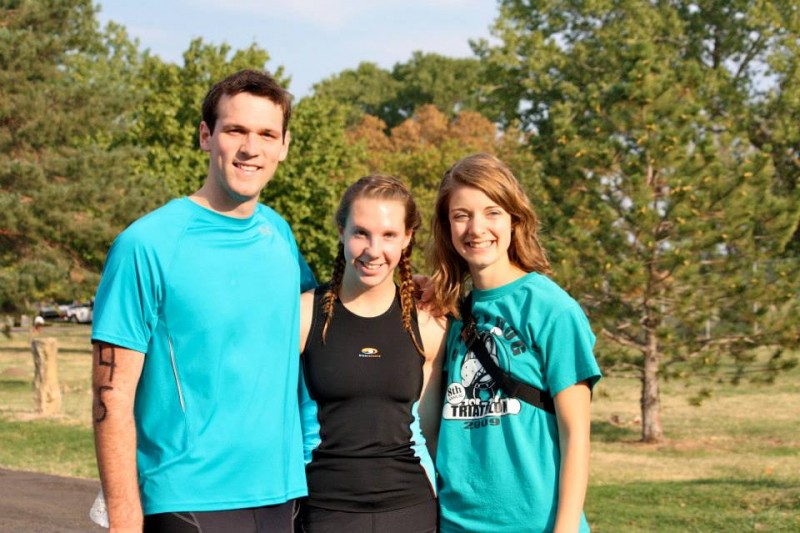 As for advice to beginners, James humbly states “Something I still struggle with is comparing myself to others, especial those who are faster than me. What is key in this sport, especially to beginners, is to understand why are you doing triathlons? The answer most often is that they are doing triathlons for themselves. So Stop Comparing Yourself To Others! If you can go out on race day, or during any day of the week, and tell yourself that you did your best and gave it your all, then you have already succeeded. YOU WON. And never forget, you beat everyone else who is still sitting on the couch at home”. James also finds group training extremely valuable, it comes full circle to companionship as the core of this sport that he loves. “Training with people who know the discipline(s) and display greater skill than you, will only push you to be better but also are a key resource to tap into for your improvement in that discipline. Don’t hesitate to ask others. People in our tri club are always more than willing to help and give you an answer. And another tid-bit of advice: Body Glide is a triathlete’s best friend!”.

James learnt what it took to lead by example, a goal that he wanted to accomplish in his professional career, and instead his personal journey aligned him to achieve more than what he imagined was possible. “Triathlon doesn’t build character. It reveals it”– unknown.