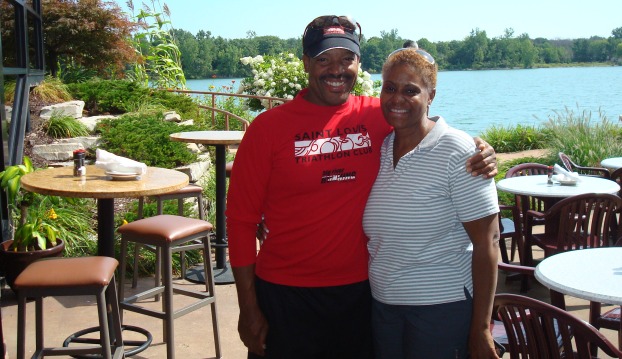 Mr. Gerald Taylor, a by-product of the inner city of St. Louis, a multi-sport athlete, a caring human being. Most of you don’t immediately recognize the name Gerald, but instantly you know him as G!.

“Joining a tri club full of iron men and women is so intimidating. Will they accept me? Will they look at me and think I am different?” — These are thoughts felt by G before he signed up to be a St. Louis Triathlon Club member, and yet, when I attended my first tri club meeting, it was none other than G who approached me and welcomed me with open arms. When I was riding through the bike portion of the Eads Bridge duathlon, it was G who cheered me on while he zoomed by me on his bike. I wasn’t even wearing our tri club colors, but he didnt care, he is just that caring of an individual. When I was struggling through my first new town swim, in the middle of buoys 2 & 3, it was G who stopped in the middle of the lake and showed me how to use the wet suit to my advantage than fight it. This is G, he encourages you, he pushes you, and most of all, he will not leave your side unless he sees you succeed.

As a child, G got into every sport he could play. He started swimming at the age of 4 and by the time he turned 13, he qualified for the junior Olympics in swimming. In high school, he played football, baseball and wrestled all 4 years. Was it nature or was it nurture? With G, it is the heart that leads the mind that leads the body. At Missouri Valley College, G went to school on a football scholarship and subsequently enlisted in the U.S. Army, where he trained to be an ophthalmic (eye) specialist. This included time spent training alongside the Green Berets, who taught him some of his core values, such as “the human mind was the only limitation of a human being”. During his fourth year in the Army, he tried out for the Army pistol team and was selected. He says his ability to run long distance comes from the ability to control his breathing while firing a bulls eye at a target. Following that life lesson, he worked as a ophthalmic technician and assisted in corneal transplants, cataracts and Lasik surgeries. Today he is an ophthalmic equipment specialist, and continues to pay it forward by sharing his expertise on mission trips with the World Cataract Foundation in Mexico and Honduras.

G started running 18 years ago again to get on a path of healthy weight loss and improve his overall health by becoming free of blood pressure medications. He successfully lost over 70 pounds and began competing in 10Ks, half marathons and full marathons. He began triathlon about 8 years ago when he participated in the Innsbrook Olympic tri. Not knowing that the swim was an open water one, and the fact that he hadn’t swum in a lake for more than 20 years, he swam so fast and fearlessly that he basically crawled his way to transition. On the bike, he didn’t comprehend how to use the gears on flat vs. hills, and we all know Innsbrook has some killer hills. But that wouldn’t stop him, he just kept rolling. Then a 98 degree hot run followed, but he didn’t give up, he finished. At the end, he told himself that it was probably best he join a triathlon club with athletes who could show him the tricks and tools of the trade, and boy was he pleasantly surprised at the St. Louis Triathlon Club. Not only did they teach him a lot, but they welcomed him with open arms and he never looked back. His advice for beginner triathletes is to “Learn the skills and learn to merge all three disciplines. Have no fear and have fun with it. Make it a lifestyle, not a fad!”. Wise words from Mr. G-man.

G’s favorite marathon was the Detroit Free Press in 2006 when the St. Louis Cardinals beat the Detroit Tigers in game 5 and took the World Series win. That was Friday, and he ran the marathon on Sunday, fully dressed in Cardinal red, rubbing it in to the locals while the crowd reciprocated. Again, this is G having fun, he always finds a way to make things entertaining. A reporter met him at the finish line and printed his brave story in the local newspaper with a picture of G wearing his Cardinal gear at the race. I asked G, which was his favorite triathlon distance, and he says “All of em, because I have learnt something valuable at each distance that have carried me to the place I am today”. He humbly says that he is still learning, but honestly, anyone who knows G will agree that he is innately a teacher of all things, including how to always stay positive no matter what life throws your way.

I asked G how he trains during the off season and he says he focuses on his weaknesses by building strength through form stretching. His favorite off season pastime is to enjoy life and not worry about racing, but he still trains hard and has a diligent coach, Samantha Murphy, who keeps him in check. He says “Samantha is a phenomenal coach who is knowledgeable and intense and yet funny at the same time. She is a 360 degree person who is well rounded in her coaching, philosophies and teaching. Under her guidance, I have lost twenty five pounds and have PR’d every race in 2014. I dropped 1hr 40 mins off of my iron man distance and finished 3rd in my age group at Michigan Titanium. The summer camp for team Evolve was more intense and harder than any races I’ve done, but you come out better learned and practiced. More than a coach, Samantha is a friend when you need her. She has made things happen in the lives of her Evolve family that have brought joyful tears to my eyes, and I don’t crack easily.” 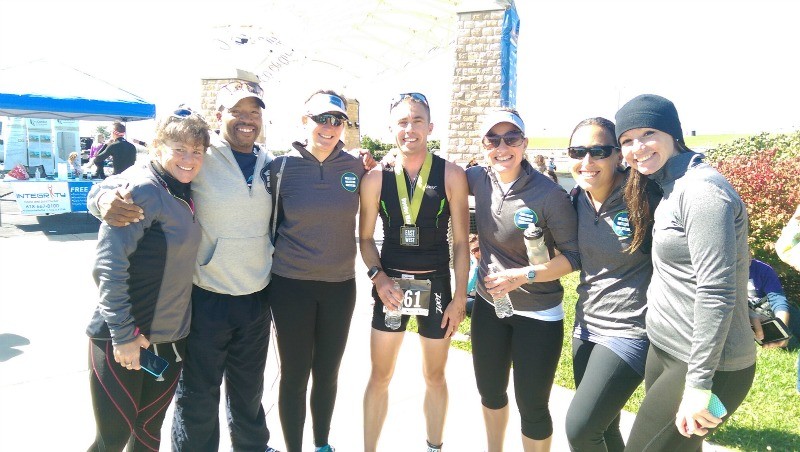 G talks fondly about his A team: I would not be here without my number one fan supporter, who is my wife Angela. She has supported me and volunteered during races that I have done. She cooks all my meals and makes sure I have all my equipment and gear for training or for race day. I appreciate her and I thank God for her.”

In a nutshell, G is a fierce competitor who sheds sweat, blood and tears to get to the stage he is at today. But what most competitors don’t always do, is carry the others on their back and ensure that they will succeed as well. No matter where you see G, he always has a huge smile on his face, a warm hug to share and a very encouraging thought to speak to you. He is a life that has touched many others without even knowing it and G is truly a blessing to our triathlon community here in St. Louis.

(Thanks to club member, Graziella Amarasinghe for writing this profile of Gerald!)