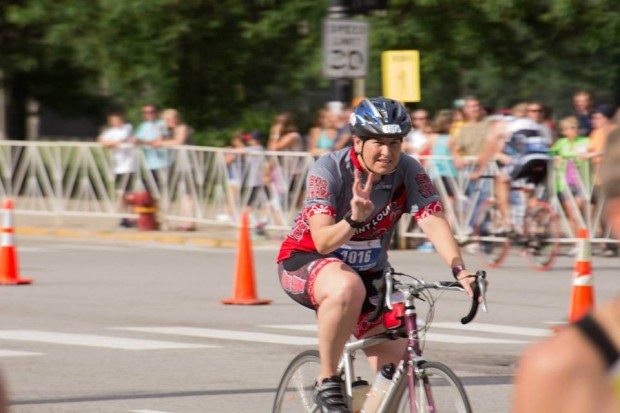 So many of us who know Dianna, you are always welcomed by a beautiful smile and a warm hug. If you have participated in the club’s Icy Iron challenges last year, then you know Dianna for her organized and tedious calculations of everyone’s mileage but more importantly for her witty jingles — Ice Ice Baby and Get Jiggy With it. She is filled with encouragement for triathletes ranging from beginners in the sport to veterans that have been doing triathaloning (Dianna’s favorite word) for years. But what makes up this talented and smart woman? What drives her to push harder from a past drizzled with cancer? What keeps her motivated? Here you will find out what makes Dianna tick.

Dianna grew up in Ferndale, Washington where she fell in love with everything nature. Her love for the outdoors started her running career in 2002 after losing 70 pounds, and till date she has run 18 marathons and over 12 half marathons. Her favorite race was the Cincinnati Flying Pigs marathon and she still talks about that one with the fondest of memories. Running for her is something she loves, but after she was diagnosed with breast cancer in 2010, things that used to come so easily with running got a tad bit harder. Did she give up you ask? Oh Heck NO! This is Dianna — a survivor, a fighter and an athlete. She completed her 17th marathon during chemo therapy — the Nike New Women’s Marathon in San Francisco and since it was a lottery entry race and she didn’t want to miss out on her chance, she kicked cancer’s butt and ran it in an incredible 6 hrs.

In 2004 she married her soulmate, Jim Shank, a St. Louis born native who now works in IT for US bank. Together they enjoy their yearly adventures in the US with their furbaby Stella. They have also traveled abroad to countries ranging from Scotland to Japan and are excited for their upcoming christmas vacation in Amsterdam and Paris.

Dianna is a tenured professor at SWIC, IL where she teaches students First Year Writing and Non-western Literature. She graduated from college with a Bachelor of Arts in English and then taught in Japan for 4 years. She then moved back to Mississippi, and began pursuing a Ph.D. in the field of Rhetoric and Composition with a speciality in Race Theory at SIUC. She will be officially awarded her doctrine in December 2014. For Dianna, she has proven that perseverance does pay off!

After getting her health back, the single sport event of running wasn’t bringing in the same thrill factor it used to pre-cancer, so she decided to jump head first into the multi-sport event of triathlon. She started racing indoor sprints in 2011, and moved to outdoor sprints in 2013 with open water swims. In the off season, wait a minute, what off season? Dianna doesn’t have an off season — she continues racing indoors at the Tri Rec Plex every sunday during the fall and spring sessions and she runs races of various distances. In 2014, she challenged her self to conquer the Olympic distance in 2014. And conquer she did — she did outstanding at Lake Carlyle and then PR’d at the ITU World Championships in Chicago, IL. This August she will also race at the Age Group Nationals in Wisconsin, where she will put her mind and body to the test. Her next goal — 2016 Half Ironman 70.3 in Puerto Rico. Care to join her journey? Well what are you waiting for, dive in, like she did!

From Dianna:
Favorite Triathlon: Lake Carlyle because it was my first Olympic and I got to race with my friends in the club.
Funniest race occurrence: I participated in the 2012 Aligator Creek Tri and while setting up in transition, I realized that I forgot my helmet. So I had to leave transition, drive to a local supermarket and purchase a helmet for the race. Now I always have a check list for transition set up.
Pre-race nutrition: Coffee (I know I shouldn’t but I need the caffeine!); Bagel and Peanut Butter
Post-race nutrition: Something salty and unhealthy like fast food fries
Advice for a new triathlete: Start with short races and then work your way up. It is worth the money to work with a knowledgeable coach (like Coach Paul!) to at least get a reasonable training schedule worked out; ask lots of questions to your fellow club mates; be brave … even when you are scared!